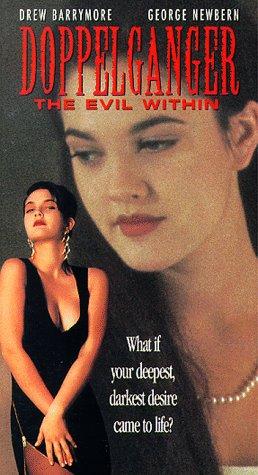 This movie is objectively bad. When you look at the imdB credits for a movie and you see characters like, “Psycho-slut #1” and “Psycho-slut #2,” you kind of know that you’re not about to get into a masterpiece.

Still, I can’t help but champion Doppelganger  just a little bit. It has a certain something, and that something is mostly “Drew Barrymore acting erratically and delivering lines like, ‘you think I’m wack-o, but I’m not – just ask my therapist!’”

This plot is this: Holly Gooding has possibly just murdered her mother. Or, her doppelganger just murdered her mother. Or, maybe it was her split personality. She’s not quite sure, and neither is her new roommate/boyfriend, Patrick Highsmith. Patrick must figure out whether or not he’s in love with Holly, or some other…thing…pretending to be Holly.

If you’re a Drew fan, you’re gonna love this movie because…there are Drew BarryMORE of her! Heh heh, get it? Get it?

Doppelganger is full of twists and turns – there’s an evil therapist! Drew Barrymore kicks Danny Trejo in the balls! The FBI is after Holly! Holly hallucinates her dead mother (played by Barrymore’s actual mother, Jaid Barrymore)! But despite all this, it’s actually all pretty benign and frankly can get kind of boring. That is, until the final twenty minutes.

I don’t want to spoil too much, but the final twenty minutes of this movie were some of the nuttiest movie moments I’ve ever seen. It suddenly takes a supernatural turn and…I don’t know how to even describe it. It has to be seen to be believed.

Barrymore seemed to have this phase in the 80’s and 90’s where she was either in mega-hits or critical flops. There’s something really charming about all the flops, though. This, Poison Ivy, Firestarter, Gun Crazy – there’s something special about watching a superstar like her be in these awkwardly clunky movies.

Watch this mediocre movie if…you think you would like Lifetime movies more if they ended in brutally gorey monster transformation sequences. That’s basically what this is, a telenovela with Drew Barrymore and some random Halloween special effects. And I mean that in the best possible way!