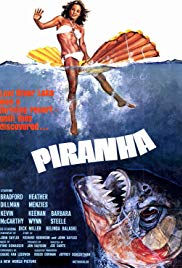 You know how they say you shouldn’t flush your fish down the toilet? Well this is WHY! One day Bubbles the gold fish is sitting in your fish tank peacefully swimming, the next day you’re getting eaten by him and 100 of his friends.

Detective, Maggie enlists a drunkard, unemployed resident (not sure why?) to help investigate the disappearance of two missing teenagers. As with the most shocking of horror films, the two make make a terrible mistake. Finding an abandoned military facility filled with weird specimens, the pair release unidentified swimming pool water into a river in order to search the bottom of it. They discover a body and that’s not the worst of it.

Shortly after the release they meet a scientist Dr Hoak, scientist of the military facility who was once tasked with creating a killer, poison resistant, strain of Piranha for war. Thought to have been shut down, Hoak decided to keep the bio weapons alive. What follows is a rush to save the town from the worst nightmare one could have. Being eaten by a pack of fish.

Watch this Mediocre Movie if… you are a sucker for bad sci-fi and love a good vintage horror film. It’s a perfect watch if you’re feeling lazy and want a laugh to pass the time. This film is like Jaws sprinkled with cheese. You’ll get just as much gore but it’s taken a little less seriously.