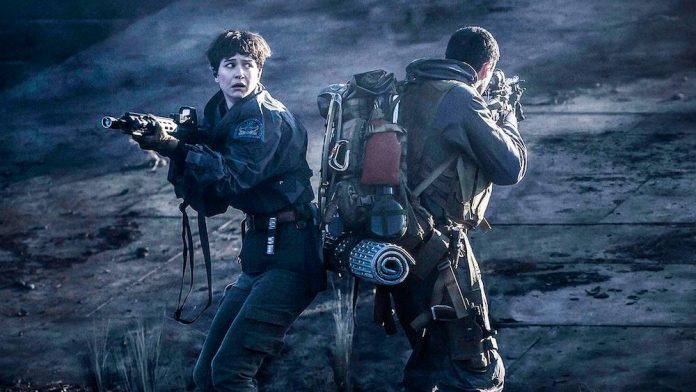 Alien, (also known as Xenomorph, Neomorph and other hybrids) is our favourite creature from outer space. They sound like a pig has eaten a bird, and looks like Cone Heads had a baby with a reptile. First seen in 1979 with Ridley Scott’s Alien, the franchise has shown these screechy creatures across 10 other films.

If you’re not up to date, here’s a recap:

Today, as we celebrate the Alien, we bring together our the three most favourite mediocre Alien films.

Wealthy guy finds a pyramid 2000 feet underground, what does wealthy guy want to do? He wants to explore… I mean why not because nothing can go wrong, right? He sends down a team of experts, only to discover that there’s something bigger than his discovery down under. Three predator mates come on down and suddenly it’s the largest predatorial match the world has ever seen, with not even Sir David Attenborough having the credentials to narrate. As the team move through the pyramid they learn that this fight has a history dating back to earth’s early civilisation and must let history repeat its course. The only thing left is to GTFO and we’ll leave that for you to find out how.

By the end of the film you’ll be sure to have a team. Who are you rooting for, Alien or Predator?

Of all the space travellers from all of the Alien franchise, the characters of this film are really asking to have their face hugged and butt plugged by the entering of an Alien into their seemingly unprotected bodies. Eleven years after the Prometheus expedition the Covenant ship crew and 2000 preserved colonists approach planet Origae-6 in the hope to inhabit a new home away from Earth. Along the way a malfunction with the ship causes the crew to stop on a nearby planet which seems so earth-like, “it’s too good to be true”. Without giving too much away, the exploration of this new planet causes both objects… and people to explode (you can only imagine how).

Perhaps the most interesting part of this film is David, the team’s Android.  With being the most intelligent of the group, combined with his inability to properly emote, he’s an outlier who brings a point of view that perhaps his human counterparts don’t really want to entertain. How far does David’s view of humankind go? That’s for you to find out in Aliens most recent addition.

Alien 3, following on from Aliens, starts as Lieutenant Ridley is found in a rescue pod by inmates from a prison on an isolated planet that holds only prisoners with a double Y chromosome. If that wasn’t weird enough, the pod’s Android blown to pieces and other crew members dead find Ridley the only survivor woken from a 57 year sleep (if only I could do the same but).

It’s not long after her awakening that people start dropping like flies. Initially blamed on the inmate awarded “Most Likely to Become Insane” at high school, his reporting of the ‘dragon’ in the facility only made his insanity more believable. Luckily for him, a Xenomorph soon makes an appearance and everyone calls it armageddon. The only thing left to do now is for Ridley to team up with the inmates who have taken a gross liking to her.  While Ridley and her new unlikely friends start to kick ass, there’s another big obstacle bubbling under the surface…

But that’s for you to find out in our third favourite mediocre Alien film.

So that’s it! We love Alien, and all of the films they feature. Though others within the franchise may rate better, we think these are perfect late at night when you’re struggling to sleep, or as a fun film to watch with a date. Let us know your thoughts in the comments below.